I don't know if you would call today and yesterday a "usual day", but for around here, it's not that unusual.

Late yesterday morning we got a call from our friend who lives next door, saying that her ewe was in labor. Now, she (our friend) has never birthed sheep before (or much of any livestock, she is used to dog births though). I didn't go right away but my mom did, and when they got there, the lamb's head and two front feet were out, and the its tongue was purple, cold and just hanging there! Oh no! So she (Mom) went in and pulled really hard on that lamb, and he did not budge. It eventually took her and 2 others to pull the lamb out - a very big ram. Thankfully after some swinging and smacking, he is doing completely fine :)!

When that ewe was done, another ewe that was due was in labor. I was there for the first lamb, then went riding horses, so missed the second. But she had an uneventful birth and had 2 baby ewes - yay! There was only a small bit of placenta that came out though.

Today we got a call and the last ewe due was in labor and pushing. So we went over and with a little help, a GIANT ram lamb came out. I have never seen such a huge baby - he is probably 12-15 lbs! After we left, she pushed out an ewe. Good deal!

But, the other ewe that had the twin baby girls was not acting right and was acting like she was pushing - no good. After we talked some, I scrubbed up, clipped fingernails, and went in to see what the deal was. All I could feel was like a bunch of placenta-type stuff. I did NOT want to pull any of it, and when I pulled my hand out some placenta-type yuck was on it. So, I gave her some injectable Vitamin C, Penicillin and Oxytocin to flush it out. Hopefully it works. I have not talked to her in a couple hours so don't know if it has come out yet.

Our ranch has been pretty uneventful. Last night the 3 llamas did not come back home as they normally do, so me and mom went jogging around the edge of the property (1 mile square) and did not find them. We checked a few hours later and they were all sleeping in their shelter... weird llamas!

Here's some pictures of a couple kids. 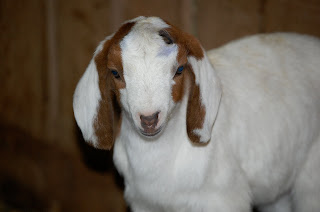 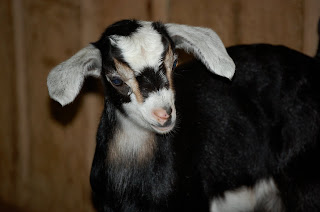 If you are not on the MDGA_info Yahoo group, the Miniature Dairy Goat Association (MDGA) is doing a Recipe Book and they are looking for recipes, especially ones that have goat milk, meat, etc in them, but anything will work. If you would like to contribute, please email me and I will give you the email address to send them to. Thank you!