Well, I had a crazy morning. . . . and I guess we all did! The whole house was awoken to Mom running in saying "Wake Up! The pig is having babies!!". So everyone ran down to the pig pen. It is my brother's pig. He's raised her since she was pretty small and then bred her. She has had 6 piglets, and I think she is probably done. They are big healthy piglets and are so cute! She had 4 girls and 2 boys. One of the boys was having a bit of a problem figuring out how to nurse, but I think they should all be fine. There are 3 black and white ones, 1 solid red, one brownish one and one red and white one... I think ;). 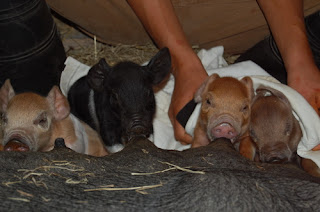 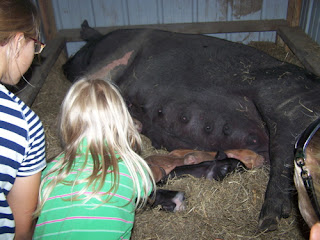 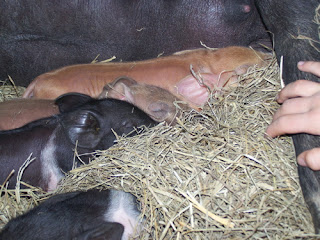 So after all that, I was already over an hour late for milking. I was coming back up and my other brother said "Hey, can you come help me? It'll only take 5 minutes." Alright, so I went and helped him and it did only take about 5 minutes :). He wanted me to give the new pigs their shots while he held them. When that was done, I was half-way deaf from all the screaming, those pigs are LOUD! The picture below is my brother with the 11 new pigs that we were vaccinating (that he got from the livestock auction last night). . . not sure what he is doing in this picture. . . sneaking up on them I guess :). 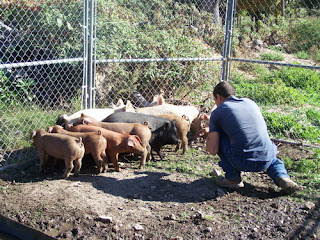 I finally was able to get the goats milked and fed, and also finally fed myself breakfast. When we got home last night, there was a box of laying hens in our bathroom - yuck! One of our friends had gotten them for us... thanks ;). 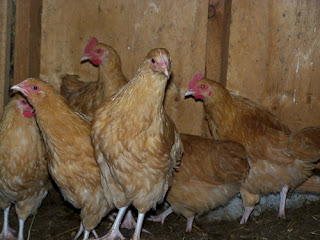 I just got done loading 20 bales of hay for a guy and am finally able to sit down and write this. Tomorrow is suppose to be another crazy day. . . going to the fair because my sister is showing rabbits, and I think I'll just go for the fun of it :)! So, I might actually schedule a blog post for tomorrow since I probably won't have the time.

Have a good day ya'll!