Well, it was a sad weekend. Thursday afternoon Double Bubble, a 2 year old first freshener doe who was 106 days bred (due in March) aborted a baby. I don't know why. She was doing pretty good but seemed like she missed the baby, until Saturday afternoon when she went downhill. Her temp was very low, so we brought her in the house and treated her for a lot of things (Listeriosis & Goat Polio, Hypocalcimia). Her temp went up and she seemed to be a bit better. But she had not pooped all day and was straining. We tubed her electrolytes a couple of times, and late Saturday night we gave her a couple enemas. She did end up pooping. I was really tired after that and went to bed. Mom checked on her throughout the night. In the morning, she was looking terrible. She started having seizures and could not stand anymore. Her eyes were darting back and forth. Classic signs of a far-along case of Listeriosis, even though we were treating her for it. As the morning went on, the seizures got longer and worse and worse. She was just slowly going, and I could not just sit there and watch her suffer. So we decided to put her down... hard decision. Very sad. She was born at our place in California and was a bottle baby. . .

But, we are still extremely blessed with too much to name.

On the brighter side of things, we had 2 bucklings born at 5:30 this morning! Since the kidding stalls are down stars right below our bedroom, mom heard a goat grunting/pushing, and we ran down there and sure enough, Piglet was pushing and there was a head and a foot out. I went in the stall and did not know how long the head had been out, and it was upside-down - NOT a normal position :)! So I found the other leg and pulled pretty hard and he came out. A buckling that looks JUST like his mom! Then a minute later the next kid came, and it was only his head so I found both his legs and out he came. Another buckling. They are both doing great and so is Momma Piglet.

A couple pictures... not very good but will do for the moment ;). 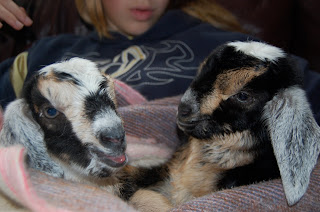 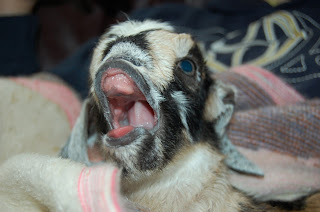 The funny thing about those bucklings is, I don't know who their sire is. The bucks broke in with the does a couple of times last year, and 2 does got bred - Bridget (who kidded a few weeks ago and she was obviously bred to a Boer) and Piglet. My gut feeling is that Junior Mint bred her, as he was the top-buck at the time and is a very quick breeder. And neither of these kids have blue eyes or are polled, so that rules out Wyatt and Lando. But, it's not really that big of a deal... I will just sell them without papers (really don't feel like doing DNA testing).

We got so much SNOW Thursday night and Friday. . . probably 8 inches or so. Today it started to melt some, so everything is getting very sloppy/muddy. It is so beautiful out and the weather has actually not been that bad to be out in. Today I got some pictures of the kids out in the snow... those will have to go in another post.

I'm very sorry about Double Bubble. It is heartbreaking to watch as they go downhill ... especially one that was bottle raised.

I think it's pretty cool that your kidding pens are downstairs. That's very convenient. I wish mine were closer. I end up going out to the barn several times a day and night when I have does due. I think I'll put in a camera system for next year's kidding season so I can check on them from the house!

Your new babies are very cute. Babies are so much fun.

Yes, it is great having the kidding stalls downstairs. That would be great if you could get a camera system - I've heard that they work good!