I know, so sorry for not posting sooner! We have been incredibly busy the past several days, as part of my family went on a trip to California (for too long, LOL :)!), so we have to do all their animal chores on top of ours. It seems like we are having 18 hour days right now. . . and come to think of it, I guess some of us really are! Anyway, I think we'll survive until they get back ;). Plus it has been SUPER hot here, which just complicates things - getting up to 103-105 every day the past few days.

Sunday morning Mom woke me up saying that Prissy was going to have her babies soon. We got up and got most of the does milked before she had the first one - a totally cute little BUCKLING. He is polled.
So as usual, I milked Prissy, fed the kid, fed all the other goats, and was still waiting on Prissy. She was having pretty good contractions on and off, enough to make me concerned. About 2 hours after she had the first kid, we decided to go in and find out what was up. Mom felt something, and it ended up being a small kid folded in half. She had to pull his head up and then he came out, and the placenta plopped out right after him. Unfortunately, he was not alive :(. Her entire labor seemed weird to me, as her contractions before she had the first kid were REALLY hard. So I don't know when he died, but it was a bummer - always sad. But, God causes everything and we have to be thankful for it all!
After dealing with that, this little guy was not-so-smart when it came to drinking out of the bottle, but finally got the hang of things. His sire is PawPawNin Quiet Wyatt. So he is 75% Nubian, 1st generation. . . polled. 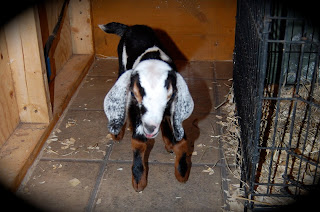 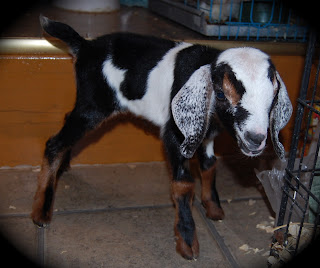 For an update on Dancer (with the worms) - so far, so good. He still is awfully thin, but is eating and much perkier than before. Loosing weight in animals is easy, making them gain it back can be quite a pain at times.


Sunday afternoon it poured rain, and it was still really hot out, so it got really humid. Yesterday morning I noticed that Parker had a runny nose and was kind of "off". This is prime weather for pneumonia. So, I gave him a bunch of vitamins and went off to town. Last night he seemed alright, but I gave him more vitamins and started him on Penicillin. He also had a slight fever. This morning, no worse and he is eating, which is good, but I went ahead and gave him a shot of Banamine. Hoping he doesn't get any worse.


Time to go too some more things! Have a good day!

Oh Sooo Cute (even if it is a buck kid;)!!
I've got one more to kid too, but not sure when *sigh*
It's difficult being patient at times:)

Yes, being patient for these does to kid can be tough sometimes :)!