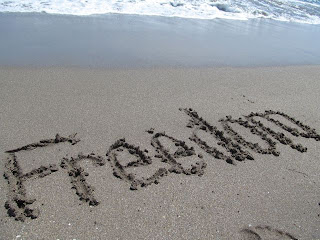 What a trip. I left home on the night of August 21st on a long road trip to Tampa, Florida. It was the trip of a life time.

Friday, the 24th, was the first day of Paul Festival. We had press passes and live streamed PaulFest both Friday and Saturday. I met so many people who I had known online, previously met at the various State Conventions we've livestreamed, or made new friends. It was a fantastic time. 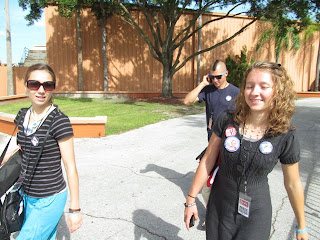 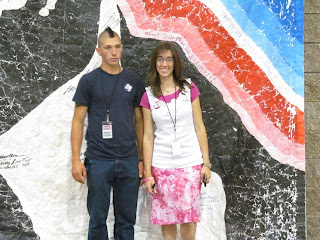 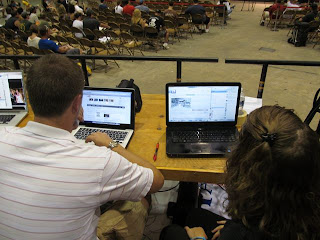 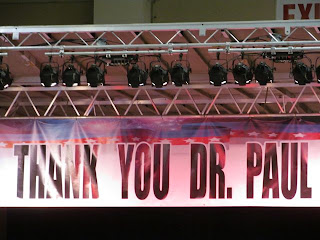 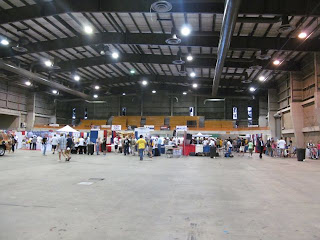 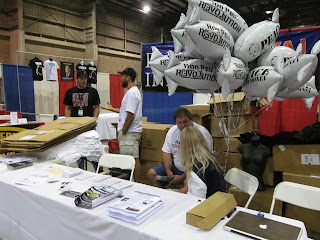 The speakers were good and so was the music, but since we sat in front of the loud speakers all day long, the loud music got to us after awhile and we had to put on ear protection! 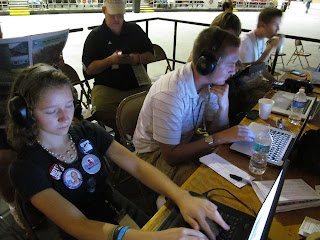 Ron Paul's brother, Wayne Paul, spoke at PaulFestival. Along with many other great speakers including Tom Woods, Lew Rockwell, and singers such as Jordan Page and Tatiana Moroz. 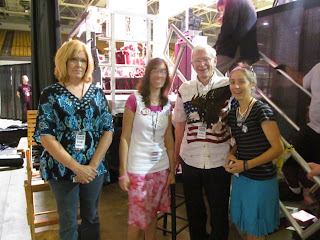 Sunday, the 26th, was Ron Paul's "We Are The Future" rally at the SunDome. The turn out was great. Me and my team found a spot high up next to some plugs, plugged in and live streamed the entire rally. 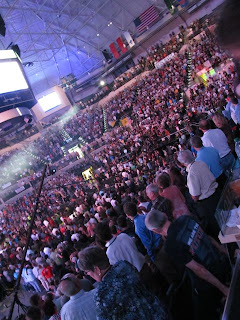 Jordan Page and Aimee Allen both sung at the Sunday rally. Before Jordan Page came onstage, Walker Block had been onstage basically advocating for abortion. As we all know, Ron Paul is pro-life, and when he heard what Block had said he was very upset. Jordan Page was not happy as well. So, one of the first thing's Jordan said was something to the effect that "we are not here to advocate abortion, we are here to protect life!". I was so thankful that he said that. He then went on to sing "Light of the Revolution" and "Liberty", two of my favorite songs. 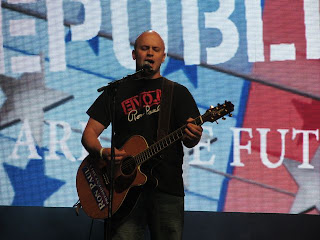 Dr. Paul took the stage a bit later and gave a long but great speech. This man has gotten so many people involved in changing America for the better. I will always truly be thankful for him and all he has done. He has fought for you and me for over 30 years, whether you have known that or not. At times he has been the lone voice of freedom in Congress, yet he has never given up. He has never compromised on principle. He has stood strong while things looked so bleak. In the face of total tyranny, he has kept on fighting. Within the last few years, his hard work has began to be noticed. He has awoken a whole generation of young people who were lulled to sleep thinking everything was okay, when in fact things were not okay. He has made us realize that we CAN do something. We can follow his example and change things for the better. Never compromise, never give up. Stand on principle. We are Ron Paul Republicans. 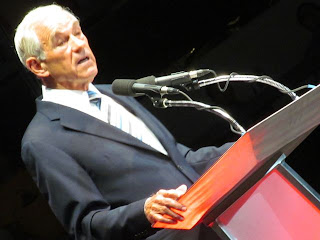 After the rally on Sunday, we all headed over to an after party on the beach at Whiskey Joe's. We talked for hours into the wee hours of the morning while Hurricane Isaac dumped rain on us. We finally headed back to our condo and got a few hours of sleep, before heading out early in the morning for the first day of the RNC Convention. . . which should not be called a Convention, more of a ConvenSham. 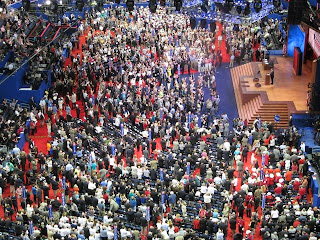 Due to the extremely high levels of security around the Tampa Bay Times Forum due to the RNC being held there, we parked our hour and had to walk for a very long ways. The next few days we found closer parking spots, thankfully. The amount of security was insane though. What a waste of money! It was as if they were expecting a bunch of crazy, insane people to come protest the RNC. We talked to several of the police men there and many of them were very friendly. Some even made fun of their job joking that they were "predicting the weather" or "making it look like they are getting paid to do something". 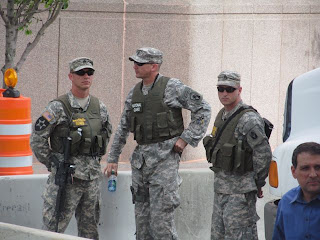 Due to the hurricane tho, Monday the Convention was called to order, then immediately called to recess until Tuesday. We hung out for a little while on the floor, had fun holding up Ron Paul signs in front of the "We Can Do Better" sign, and chanting President Paul. After a few hours, we headed over to one of the houses the Oklahoma delegates rented out and did lots of strategy talk to get Ron Paul nominated. 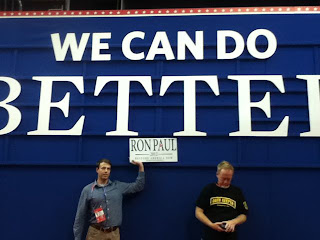 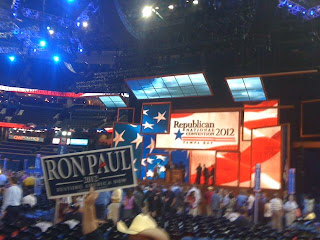 Tuesday, the 28th. The day the Republican Party officially showed they could care less about the people, about the voice of the delegates, about any rules. The entire thing was teleprompted. They had already pre-decided who won the voice vote. They acted as if the entire forum was filled with a bunch of silent robots. They called for the voice vote on the rules, and it was at the very least 50/50 with the ayes and the nayes (from my opinion the nayes were louder). But, as the script read and chair acted as a robot reading the script, "in the opinion of the chair, the ayes have it". How insane. I was flabbergasted, but not entirely surprised. I knew the Republican Party was corrupt. I just didn't realize how corrupt they really were. The delegates then began to yell and chant, "Point of Order" and "Division" all to no avail.

At one point nearly the whole convention was chanting "Seat Them Now", speaking of Maine's rightfully elected delegates who were thrown out by the Romney campaign and the corrupt Establishment. The chair acted as if they were not yelling anything important, but asked that we please respect the speaker. What?! They really cared not at all for what the delegates said. It was so disheartening. These people have worked for months and years to get to this point. To be delegates to the National Convention, only to be treated as if they were not there and completely disrespected.

The votes were then called, and I have to give special thanks to the Nevada delegation chair, who announced at the microphone when he told their states votes, that Ron Paul was nominated in 6 states, but the RNC was so corrupt and did not recognize it. Had they recognized that Ron Paul had been nominated, he would have received a 15 minute speaking spot and the convention could have had a completely different turnout.

We all left the RNC, and gathered together again at Whiskey Joe's. After such an emotional and disheartening day, it was so inspiring to get together with all these fellow liberty lovers who worked so hard, yet in the face of complete corruption were not giving up.

The next day, Wednesday the 29th, we all went back into the RNC and watched the video tribute to Ron Paul and listened to Rand Paul's speech. After his speech, we went out and met on the main floor of the forum with delegates from Maine and Texas, and many other states. We then marched out of the RNC chanting "As Maine goes, so goes the nation". That was very inspiring to be with so many people who were united against the corruption of the GOP. It gathered a lot of media attention.

That night we had a party at one of the houses some of the Oklahoma delegation had rented out. It was another very late night, but was so very worth it.

Oklahoma and Maine stand together. We both fought hard against the corrupt Establishment and lost. But in the long run, we did not loose. We will keep fighting and will not back out and give up.
We love you Maine! 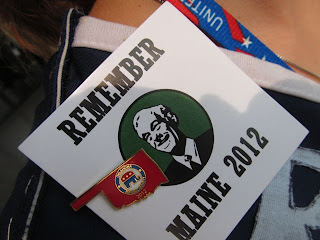 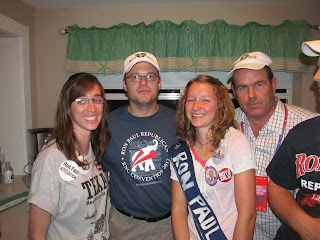 Jay Lake, the only one on the Credentials Committee who stood up for Oklahoma for what was right. Thank you Jay!! 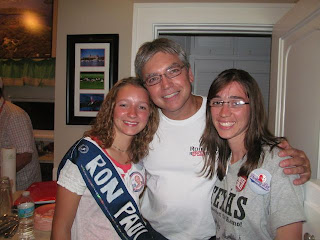 Thursday the 30th, the last day of the RNC. We held a press conference that evening on the balcony of the Tampa Bay Times Forum. That was a very good time and it was good to let our voices be heard to the media. Let them know why were were disgusted with the Republican Party, yet at the same time why we are not going anywhere and are going to stay involved.

Thursday night we had a surprise birthday party for Brady Wright, one of our Oklahoma patriots and grassroots leaders. There were people from over 33 states and 250+ freedom fighters there. It was a great time and yet another late night! 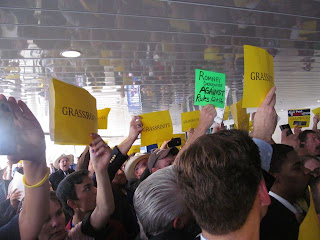 Friday was our last full day in Florida. We slept in, went to the beach and the pool, played volleyball and relaxed. This trip was definitely the trip of a lifetime and one I will not soon forget. I met so many people and was so inspired to keep on going. Despite all the corruption and complete disregard for the rules that the Republican Party showed, we are here for the long haul. We can, God willing, change the Republican Party back to what it was built on and eventually take over. It has happened in a few states, and we are here to finish that work. Stay involved, don't give up. 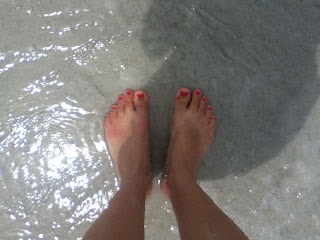 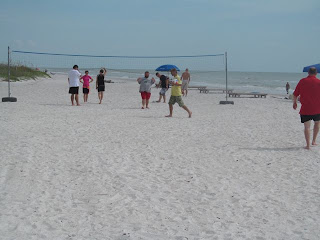 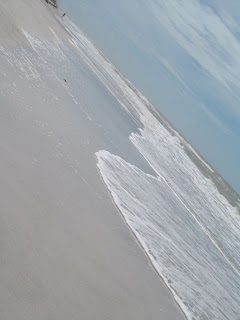 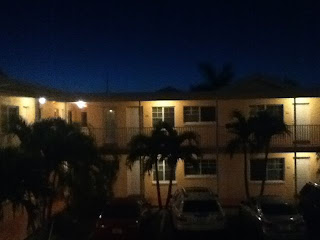 Here is a quick music video I put together about our trip to Florida. It sure makes it look a lot more vacation like than it really was!!

I hope you all have a great day! Stay involved, don't give up!!

I want to give special thanks to my Mom and little siblings for holding down the ranch while I was gone for so long. You guys did great and I am so thankful for you all! I know you would be out there fighting with me, but someone has to keep it going on the home front!!