Yesterday one of our Alpine does gave birth to a monster. 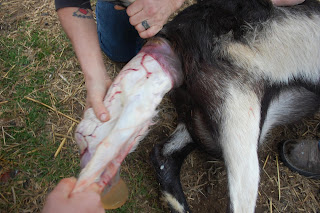 A 10.5 lb buck kid. I think he looks like a stuffed animal. Surprisingly he is white and looks Saanen, even though both of his registered Alpine parents are very colorful. Kind of strange. He does have a few black spots on him. He's a gentle giant though. 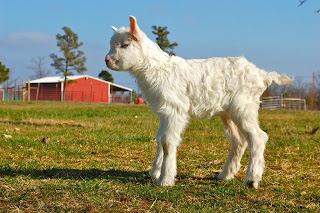 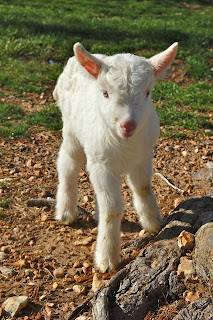 She also gave birth to an alien. Just kidding. But she had a DOA doeling, which was sad. It was our first kid loss of the year, which isn't bad considering we've had 34 kids born. The doeling was small, about 4 lbs, and had solid blue eyes. Very very strange. I'm hearing that it could mean that she was blind, which can be caused by a vitamin A deficiency. Last year I gave all of our pregnant does vitamin A&D shots because of the drought and feed being low in vitamin A. This year I did not. Maybe that was a bad idea to not... still thinking through all of it.

The doe is going great, although she seems a little sore but that is to be expected after having a 10.5 lb kid and not being a very big doe. The buckling is doing great and is a piglet. 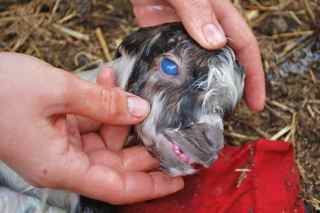 This morning was busy busy. Between loading hay, helping birth triplets (another one of the Alpines had 2 bucklings and a doeling), disbudding kids and sending kids off to their new homes, it was a little bit hectic. But... that's part of farm life, right? 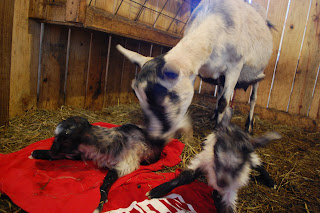 We sent LaWanda, one of our older MiniNubian does who has had some trouble this year, off to a retirement home with a few of our kids to a couple ladies we know who spoil their goats. I'm sure she'll be just fine. 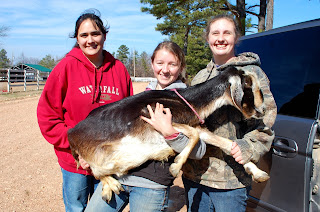 We shall see what the rest of the day holds...

That buck is big and so handsome. I am thinking about an Alpine or 2 if I can find some. Not very many around here. And a nice goat retirement for Abby, my oldest doe. I'm so glad you found a place for yours to go.